Safe and sufficient drinking water is essential for life: we use it for drinking, food preparation and cleaning. However, more than half of the river and lake water bodies in Europe are reported to be in less than good ecological status and about 25% of groundwater across Europe is in poor chemical status. And, the situation is not improving anymore.

Measures to reduce nitrogen pollution from agriculture and improvements in waste water treatment have led to a steady reduction in average nitrogen concentrations in rivers from 2.7 to 2.1 mg NO3/l (1992 to 2012) and average concentrations in groundwater are well below the Groundwater Quality Standard of 50 mg NO3/l .However, persistent hot spot areas remain across Europe at the regional level with nitrate levels stagnate  above the set standards.

Several countries in Europe report aquifers having concentrations of pesticides that exceed the standard of 0.1 µg/l. This is also the case in several of the Waterprotect Action labs. Headwaters draining areas with intensive agriculture, also show elevated concentrations of pesticides in the surface water, impacting drinking water production from surface water further downstream.

Despite the increased integration of policies to deliver clean and safe drinking water over the past decades, there is clearly a need to increase the engagement of interdependent actors and stakeholders.
The reduction of the diffuse pollution of drinking water sources by pesticides and fertilisers used by the agricultural sector remains the biggest challenge and requires a move towards more bottom-up water governance between the various actors and stakeholders: water companies, farmers, nature conservation NGOs, plant protection product producers, fertilizer producers, food and retail businesses, consumer organisations, environment agencies and ministries.

In each of the seven proposed WaterProtect action labs, water pollution from either nutrients or pesticides or both is prevalent and most catchments pose challenges for drinking water production.

Nearly one million people depend on water originating from the WaterProtect rural and urban case study areas (Spain: Llobregat delivering to 550,000 inhabitants of the city of Barcelona; Belgium: the city of Ieper xxx inhabitants, and Poland: 330,000 inhabitants).
Apart from benefits arising from ecosystem services by clean water and reduced costs of healthcare, sustainable solutions to clean up diffuse and point sources will have a big impact on reducing costs of water treatment for the removal of nitrate and pesticides. To give an idea, the estimated costs are in the order of 12-15 M€ per year to remove pesticides using active coal treatment in drinking water production facilities in Flanders (Belgium). 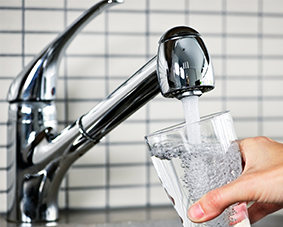