The past year was very intensive for the Polish team of WATERPROTECT. During that time several workshops for farmers and stakeholders were organized in the Gowienica Miedwiańska river catchment which brought a new light into, developing an optimal way of water resources management . Systematic monitoring of water quality in the river and groundwater was carried out throughout that time.

Meeting with young generation at a primary school in the catchment area - Educational lesson about water cycle and water pollution, soils and water contamination.

Two educational workshops took place in Warnice and Kłeby village  to raise environmental awareness of the local citizens through the presentation of water cycle and migration of contaminants from the surface to the aquifer.

During workshops for farmers the use of good agricultural practices was discussed. Stakeholders indicated the advantages and disadvantages of their experience with the best management practices (BMPs) that are relevant for the farming conditions in the Gowienica catchment. Also the legislative changes concerning the program of measures (POM) to reduce nitrates pollution from agricultural sources and to prevent further contamination where presented. During all the meeting with stakeholders in November and December, water samples from the farm wells provided by inhabitants were tested on nitrates occurrence.

In February, the WaterProtect team organised a meeting with a local stakeholder: Polski Cukier S.A. - Polish Sugar Inc. (food producer) and local farmers. During this meeting the company presented their expectations as to the cultivation and quality of sugar beet, as well as plant protection chemicals and fertilizers. In line with that, water protection issues were raised by Waterprotect project representatives.

Later that month, the Waterprotect team presented the main goals and achievements of the project to the members of the Association of Sugar Beet Growers with the invitation of further cooperation. 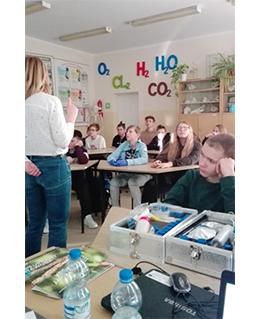 Presentation of the collaborative webtool voor the Gowienica Action lab

In March, a one-day meeting of the Polish consortium team took place where the functionality of the new mobile application was shown. The prototype version of Waterprotect application for mobile users enables easy access to current spatial hydrogeological, geo-environmental and geological data of the action lab area.

To improve the understanding of the application of best management practies and the level of fertilization and the related yields, many bilateral meetings with farmers and stakeholders were organized, which resulted also with closer cooperation with farmers to establish new contacts from cooperating institutions due to staff rotation.

The past summer was a period of intense preparation for the annual AgroPomerania Agricultural Fair in September. The waterprotect application development has been finished and started testing. A folder about best management practices and their use was developed to be circulated among farmers in September.

In the summer issue of the West Pomeranian Agricultural Magazine, an article and advertisement about WaterProtect were published. The article informed about the role of water in life and the necessity of its protection. Two other articles concerning the Gowienica catchment action lab were submitted to scientific papers and are waiting for their evaluation.

The XXXII Agricultural Fair AgroPomerania held in Barzkowice from 6 until 8 september was the ideal location for the Polish Action lab to have another information campaign about problems of ground and surface water pollution with nitrates and its origin. At the Waterprotect exhibition stand on AgroPomerania, visitors had again the possibility to test their water quality just like at the last fairs. Individual stakeholders in the region could bring a sample of water from their intake and test it for nitrate content. The results of the research often indicated that the problem of nitrates pollution in drinking water is a real risk. The booklet of AgroPomerania also contained an article about the Waterprotect project.

At the same time, a workshop fpr a group of institutional stakeholders was organised, during which the best management practices (BNPs) in the catchment area and the mobile waterprotect application with geospatial data were presented.